We know how lives of our grandparents passes during their ending days. We know how they are being criticized by our parents for some reasons. We know how they chant God's name all through the day. We know how badly they want some one to hear to what they want to say. We know how great they have been and what all they must have gone through after we face the problems ourselves. I realized this long time back and have always respected them since then. I look at them and feel scared that would I be able to be like them when I reach 80's. They are damn solid, touch wood or even tree, but they are and I wish they remain the same long enough from today. 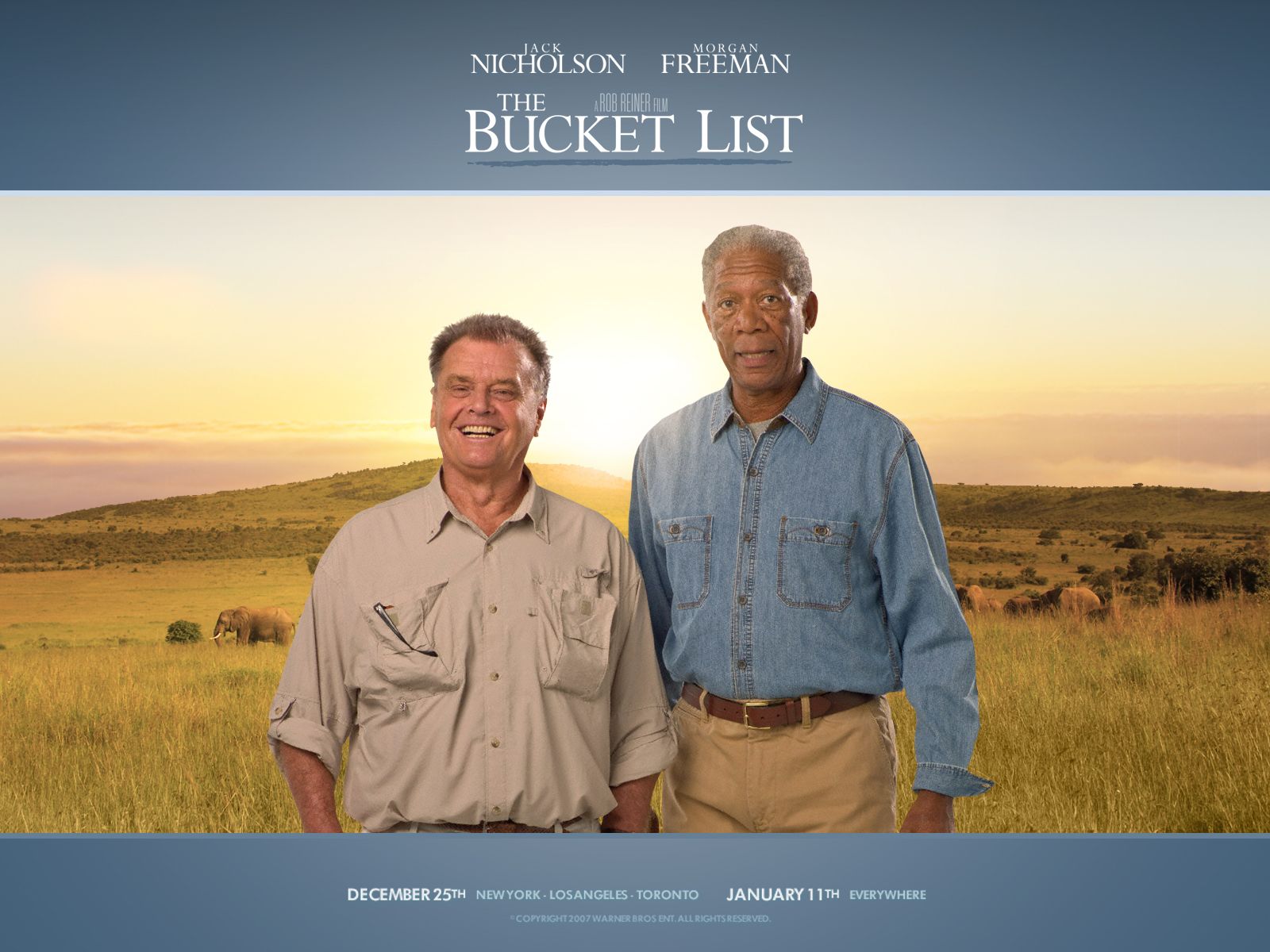 Bucket List is a movie which touched me and I hope a lot of us. My baba(dada/grandpa) criticizes almost all the movies and he gives correct reasons for the same. He hasn't watched some good movie since ages and I wanted to change that. He never agrees to such requests but I managed to convince him to give it try, and he agreed (maybe to make me happy). I was pretty sure he will like it but was a bit scared what if he left in the middle.

Baba is pretty good with English, as he used to read a lot of books until recently and that is something I am really proud of, today who is privileged to get a grandpa who can not only understand English but even converse in the same. Still the English in the movie goes on pretty fast, so I had to help him out sometimes and after that he used to laugh. At some moments in the movie like when the two fellows drove their cars like young kids, when they jumped from their airplane for the sky dive and many more - I saw him laugh like I had hardly seen before. Time went by and movie had to get over, but he watched it at a stretch, sitting at a single place. P.S. I had to get up two times to get some water and snacks.

After the movie, he said the movie was very touching and thanked me for making him watch it. He said "Thank you for giving me a nice entertainment after a lot of years". This made me feel special and I can't describe the feeling but I was feeling very happy and proud to bring some happiness in his life.

I would like you all to make some time from your busy schedule and make them feel special, at least give them time and listen to them. All they want is your happiness and a little attention.

After the movie, he got a chance to speak and so he did and I listened patiently. He let his feelings flow and told me a lot of things and his life. He has been happy with his life, he has experienced joy in his life. He loves silence and likes to chant God's name all day, but 24 hours is too less for him. And we are tired of these 24 hours at the age of 20. He says if he gets more time to take God's name, then it would be great. He expressed that the problems in life are going to be endless, but don't loose heart and ever feel like a loser. He always refers to Bhagvad Gita and says that people are going to have their unique nature and their nature decides their opinions; different opinions is the reason for all fights and troubles. So learn to accept their opinion and don't impose your view over them. He says that the only way to end a fight is to stop speaking and soon the other one will give up. He also said many things about his past which made me more matured. His motto remains the same - "Listen more and speak less".

The day well spent and will be cherished. So make time to make your closed ones feel special.
bucket list emotions family feel good movies grandpa

A wonderful date with myself.

October 09, 2015
Originally published here A wonderful date with myself. I was on my way back home from office, but something was different today, it was not the same as everyday. There was a cheerful smile on my face which was not going away, it was the smile which comes after you do an honest job during the day. You are tired after working hard, still there is an inner satisfaction which is making you happy. The happiness of meeting my own expectations makes me proud of myself. I am not making any one else proud, not my parents, not my friends, not my firm where I work, its for me and me only. Finally I reach home, I observe the lights are off from the window, I realize my friends are not home. I open the door with the key placed under the doormat, switch on the lights and put down the bag from my shoulders. It would have been fair for me to let the laziness take over me, allow loneliness to lay its shadow on my smiling face and take away my happiness. It is always easy to miss friends, order s
Read more

August 19, 2012
Fountain Head by Ayn Rand is one of the best books I have ever read, and best in the philosophical genre. This blog is not for any reader, it's for me and my memories. I want to preserve the feelings I am having right now after reading this book and how deeply it has changed my thoughts and way of living. We all want to be happy, it's a natural human tendency. We all think why is that happiness ends and why can't we always be happy. Why is that everything is temporary and we can't achieve permanent happiness. What is pursuit of happiness and why we always fail to be happy and end being sad. The answer to all these questions is as simple as saying that we all strive for virtual happiness, which means we just want others to have a projection that we are happy. We all do a lot many things, achieve some commendable stuff, create some mind boggling records, but do we do it for ourselves? If you are true enough to yourself, you will get the answer and I don't think
Read more

What we want from our life is a question which is not easy to answer. Some times you think you know the answer to it, but the next moment you realize that you were wrong. There are certain main stream answers to this question like live each moment, don't plan for the future and everything will turn out to be good, does this actually happen except for a handful of people who were lucky enough that their random choice gifted them the taste of success. Other main stream things which we do, is we make ourselves happy with what we get, and then its easy to say, that yeah life turned out to be good, some way or the other. I often ask myself, which among the two paths will give me more happiness, the planned destination or an unplanned one, but I still don't have a clear cut answer to this simple question. I am not the hater of main stream notions, but I don't wish to follow them even, if I don't want to. Let me argue both sides of the it, with the thoughts that have flo
Read more